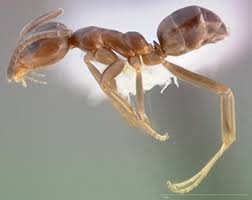 Argentine ant colonies are located in wet environments near a food source. Outdoors, they usually build shallow nests under boards or stones, beneath plants, near water pipes or alongside sidewalks. Argentine ants may seek shelter indoors when it becomes too wet or too dry outside.

Argentine ants follow regular trails, and are often found outside near insects such as aphids, that produce a honey-like secretion, called honeydew. They like sweets best, but also feed on oil, fats, meat.

Colonies have many queens, and hundreds, or up to several thousand, workers. The numbers change depending upon the time of year. Overwintering nests are formed by colonies joining together. Different colonies get along with each other, but Argentine ants are aggressive towards other ant species and usually get rid of them. Mating takes place in the nest, so winged reproductive females are not often seen. Development from egg to adult takes an average of 74 days.

Argentine ants do not cause damage, but they can contaminate food.

Argentine ants are attracted to moisture. To prevent, eliminate standing water around the property. Keep tree branches and other plants cut back from the house. Sometimes ants use these branches to get into your home. Make sure that there are no cracks or little openings around the bottom of your house. Ensure firewood and building materials are not stored next to your home because Argentine ants like to build nests in stacks of wood.