Color: Shiny, black, with red “hourglass” on back 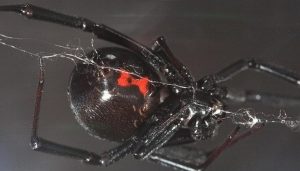 Black widow spiders are most recognized for the red hourglass shape under their abdomen. This spider gets its name from the popular belief that the female black widow spider eats the male after mating, although this rarely happens. 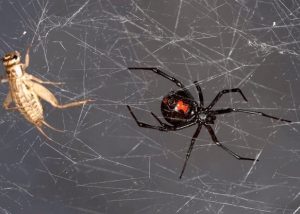 Outdoors, black widow spiders commonly live in protected areas like under stones and in firewood piles. They are often found in barns, outhouses and sheds. Indoors, black widows prefer cluttered areas of garages, basements and crawl spaces. Black widows are active when the temperature is 70 degrees or higher, but they can survive lower temperatures with the right conditions. Black widow spiders spin irregular webs, which they build at night near ground level. Once complete, these spiders hang upside-down in their webs.

Like many spiders, the black widow spider eats other arachnids and insects that get caught in their webs.

Black widows are primarily solitary, with the exception of late spring when mating occurs. Female spiders can live up to three years. Males typically live for one or two months. The female creates papery egg sacs that contain between 200 and 900 eggs each. The eggs hatch after about 30 days. The baby spiders are cannibalistic and few survive the three-month development to adulthood. Black widows are considered the most venomous spider in North America. Their venom is reported to be 15 times stronger than a rattlesnake’s.

While male black widow spiders rarely bite, females are known to be aggressive and bite in defense, especially after laying, and when guarding eggs. Symptoms of a black widow spider bite include fever, increased blood pressure, sweating and nausea. Fatalities are unlikely, as long as proper medical treatment is sought in a timely manner. If you notice black widows or signs of infestation, contact a professional immediately for a proper course of black widow spider control.

To prevent black widow spiders invading your space, reduce clutter in basements and garages to eliminate hiding spots. When spider webs are visible, use caution before putting your hands or feet in that area. You should also wear heavy gloves when moving items that have been stored for a long period of time and shake out shoes before wearing them. Outdoors, store firewood at least twenty feet from the home and five inches off the ground.