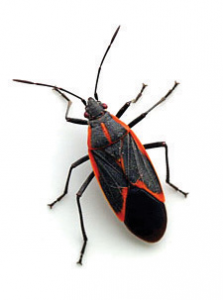 Boxelder bugs get their common name from the fact that they are often found on and around boxelder trees. This species is native to the western states, but can be found in the eastern states. 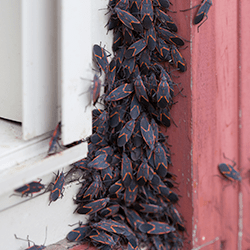 In autumn, boxelder bugs become “sociable” and congregate on the south side of rocks, trees and buildings where the sun hits. After large masses gather, they migrate to nearby buildings or homes to overwinter. These pests tend to hide in small cracks and crevices in walls to insulate themselves from the cold winter temperatures. In late March to early April, adults leave their overwintering sites to return to their host trees for the warmer months.

They feed on leaves, flowers and seeds. Occasionally, they will feed on the fruits of plum and apple trees.

Adult boxelder bugs are about 1/2-inch long, black with orange or red markings, including three stripes on the prothorax, the area right behind the head. Their wings lay flat over their bodies, overlapping each other. The immature nymphs are 1/16th-inch long and bright red when they first hatch. As they grow older and become larger, they are red and black. You can potentially see all stages at any given time during the summer. Adults feed on low vegetation and seeds on the ground during spring and early summer, and begin mating a couple weeks after they started feeding. Starting in mid‑July, they move to female seed-bearing boxelder trees, where they lay eggs on trunks, branches, and leaves. They are rarely found on male boxelder trees. During late summer and fall, boxelder bugs start to leave the trees from where they were feeding to find protected areas for the winter. Although nymphs may be present in the fall, only fully grown adults survive the winter.

Boxelder bugs are mainly a nuisance pest with them covering the outside of your home, and often finding their way inside. These bugs are not known to bite, but their piercing-sucking mouth-parts can occasionally puncture skin, causing a slight irritation and producing a red spot similar to a mosquito bite. When crushed or handled roughly, boxelder bugs may leave a red-orange stain from their fecal matter that can result in discoloration of curtains, drapes, clothing, etc.

In order to prevent boxelder bugs from invading homes, repair holes in window and door screens, seal cracks and crevices with a good quality silicone or silicone-latex caulk and install door sweeps to all exterior entrances.