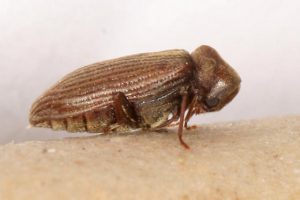 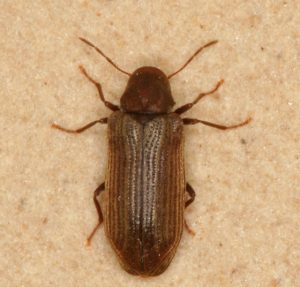 Most wood-boring beetles found in structures in the PNW belong to the family Anobiidae, the deathwatch beetles. Often, they are mistakenly called powderpost beetles.

Deathwatch beetles primarily infest softwoods, especially Douglas-fir, which is used in girders, beams, foundation timbers, and some types of furniture. You’ll typically find this beetle in old wood or wood that is partially decayed. Deathwatch beetles prefer wood that is more moist—greater than 14% moisture content—than what powderpost beetles prefer, so they might be less of a problem in houses with central heating and air conditioning; you are more likely to encounter them in damp sub areas, basements, or outbuildings

The western deathwatch beetle is responsible for most of the beetle-related damage to wooden structures along coastal areas. Although common in older buildings with crawl spaces or basements, their small size 0.13 -0.38 inch (3-6 mm) and dark color means these insects are rarely observed. Adults communicate with each other and probably locate mates by tapping their heads against wood, usually at night. Deathwatch beetles might have acquired their name during medieval times in Europe when people heard the tapping while sitting up with a sick or dying person during the night. Any wooden timber with a moisture content of 13% to 18% is subject to attack. Adult beetles lay eggs in cracks and depressions of structural timbers, predominantly Douglas-fir. Upon hatching, larvae bore into wood, produce a pellet-like frass, and may continue to feed for 5 or 6 years or longer. Eventually they tunnel toward the surface, pupate, and emerge as adults during summer. The cycle continues until all available nutrition has been depleted. Often, only powdery frass and a wooden shell are all that remain of a structural timber.

Damage to structural timbers, lumber and lumber products. In structures, most species attack only older wood (9-10+ years old). These wood-infesting
beetles cause extensive damage to wooden buildings. Damage often is overlooked, as these insects live in portions of the structure where people seldom see
them.

The deathwatch beetle typically lays her eggs on the same wood from which she emerged. Look for round exit holes with piles of  frass nearby and new holes in the spring.

Proper ventilation and drainage, removal of wooden debris, and installation of a vapor barrier in the crawl space reduces the likelihood of an infestation. Replace any damp-damaged wood.