Region: Found in tropics and the U.S. 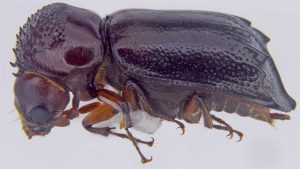 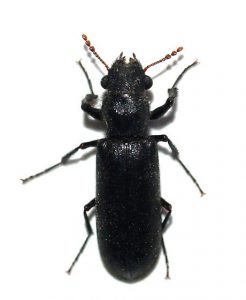 In buildings, false powderpost beetles infest floors, furniture, hardwood paneling, and other wood materials. Adults of some species bore through soft metal such as lead and silver as well as plaster and other nonwood materials, searching for sites to deposit eggs or protection from weather extremes.  In the wild in California, the leadcable borer frequently is associated with dying branches on native oak and walnut trees. In urban and rural outdoor settings, it can be found in association with eucalyptus and other ornamental hardwood trees.

Adult false powderpost beetles are dark brown or black, sometimes with reddish mouth-parts, legs, and antennae. Adults of most species are about 1/4 inch long, but one very abundant native California species, the black Polycaon, Polycaon stoutii, is 1 1/2 to 2 inches long. Adult false powderpost beetles have a humpback appearance, so you typically won’t see the head if you view the beetle from above. Unlike female powderpost and deathwatch beetles, which lay their eggs while on the wood surface, false powderpost beetle females bore a tunnel, or egg gallery, into wood or other materials then deposit their eggs in pores or cracks within the tunnel. The duration of the false powderpost beetle life cycle varies. Most species develop in 1 year, but the black Polycaon can take up to 20 years to develop. In some areas of the PNW, this species frequently is encountered in hardwood flooring from oak, ash, walnut, cherry, or even madrone and is thought to infest the raw flooring material at the mill or holding areas prior to construction.

Infest and damage hard and softwoods. Some species can damage soft metals as well as suspended telephone or electrical cables.

Protect wood from infestation by painting or varnishing to seal pores, cracks, and holes where these beetles could lay eggs. To keep from accidentally introducing wood-boring beetles into a finished structure, inspect furniture and other objects before bringing them into buildings. Remove and destroy dead tree limbs around buildings or near any area where wood products are stored. For firewood: only bring in what you can burn that day.