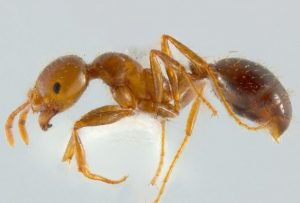 These red ants build large mound nests that are flattened, irregular in shape, and between two and four square feet in size. They are commonly introduced into new areas through potted plants, shrubs and trees. They usually nest in soil near structural foundations or in landscaping. Although these fire ants are often found outdoors, they can gain access to buildings through HVAC systems and AC units.

A newly mated queen lays about a dozen eggs. When they hatch 7 to 10 days later, the larvae are fed by the queen. Later on, a queen fed by worker ants can lay up to 800 eggs per day. Larvae develop 6 to 10 days and then pupate. Adults emerge in 9 to 15 days. The average colony contains 100,000 to 500,000 workers and up to several hundred winged forms and queens. Worker ants exhibit a range of sizes.

Fire ants will sting humans who disturb a nest. The sting of a red imported fire ant is painful and often results in a raised welt. A person stung by fire ants will often receive multiple stings from more than one of the ants. Persons allergic to insect stings will react more severely to red ant stings.

Red imported fire ants and their telltale mound nests should be actively avoided. Interfering with a fire ant nest can cause them to sting, resulting in painful welts. To prevent red ants from entering a structure, seal all internal and external cracks and crevices.