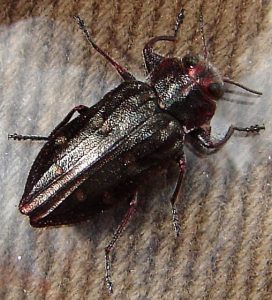 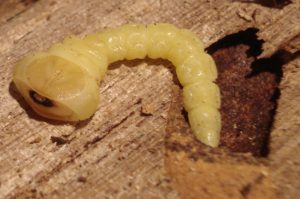 Determine if there have been causes of stress to the trees. Drought, sunburn, flooding, and tree wounds are some of the underlying factors making trees susceptible to flatheaded borer damage.

Alder, birch, ash, oak, boxelder, mahogany, maple, poplar, sycamore, willow, as well as many fruit trees. Larval feeding may occur in any part of the bark from the roots to the tree top; however, feeding typically occurs in the main trunk, especially in smaller trees

Trees such as alder, birch, oak, and many fruit trees.

Adults emerge from April through August but mostly in June and July. Soon after emergence, mating and egg-laying begin. Eggs are deposited singly but may be laid close enough together to form clusters. The eggs are usually deposited in bark crevices or depressions. During eclosion, larva bore through the bottoms of their egg shells directly into the bark. Most larvae reach maturity by September or October, construct pupal chambers in the heartwood. Borers overwinter as prepupae. Pupation occurs mid-March into June, with most larva pupating between mid-April and mid-May. Adult emerge in the pupal cells and chew their way to the outside. Usually, there is one generation per year, but the life cycle may be longer at higher elevations and in its northern range.

This borer is considered one of the most damaging pests of newly planted deciduous trees. It is an important pest in nurseries, where trees may be killed or so severely injured that their value is diminished. Also, shade, fruit, and nut trees may be killed or disfigured. In native forests, branch mortality is common, but the insect rarely kills an entire tree.

Little (sometimes no) frass is ejected to the outside, but as they burrow, larvae pack it behind them within mines. The first evidence of feeding is usually dark wet spots on the bark, which may later crack slightly and expose borings.

Young transplanted trees can be protected by mechanical covers over the trunks. Mechanically removing larvae is an effective control for valuable trees. Sanitation practices include removing weakened, injured, dying, and dead trees from the area. Chemical controls are sometimes needed to protect valuable plantings.