Region: Found in the Pacific Northwest 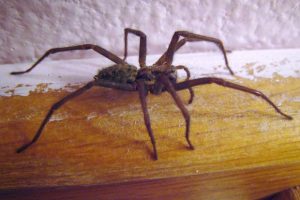 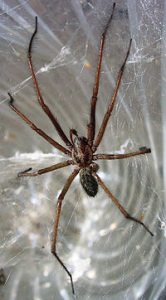 The two sexes do not differ in coloration or markings. Its coloration is mainly dark brown. On its sternum is a lighter marking, with three light spots on each side. The giant house spider has the same coloration as the domestic house spider, it has earthy tones of brown and muddy red or yellow. They also have conspicuously hairy legs, palps and abdomen.

The giant house spider’s original habitat consists mostly of caves, or dry forests where it is found under rocks, but it is a common spider in people’s homes. The webs built by the giant house spider are flat and messy with a funnel at one end. They do not contain sticky threads. The spider lurks in the funnel until a small invertebrate happens to get trapped in the web, at which point the spider runs out and attacks it. They usually build their webs in corners (on both the floor and ceiling), between boxes in basements, behind cupboards, in attics, or any other area that is rarely disturbed by large animals, or humans. Often found near window openings.

Insects and other spiders.

The female body size can reach 0.73 in in length, with males having a slightly smaller body at around 0.47 to 0.59 in. in length. The female leg span is typically around 1.8 in. The leg span of the male is highly variable, with spans between 0.98 to 2.95 in being common. Its eight eyes are of equal size and are arranged in two rows. They normally live for two or three years, but lifetimes of up to six years have been observed. While the female only leaves its nest to feed, males can often be seen wandering around houses during the late summer and early autumn looking for a mate. Males can be found from July to October, adult females occur all year. At least 60 spiderlings emerge from an egg sac. Unusual for spiders, they are subsocial at this stage: they remain together for about a month, but do not cooperate in prey capture. The amount of cannibalism correlates with the amount of available food.

The bite of this species does not pose a threat to humans or pets, and it is generally reluctant to bite, preferring to escape.

Some key preventive things a homeowner can do is reduce the population of insects that serve as food for spiders, seal up holes, cracks and gaps in the home’s exterior to prevent entrance by spiders into the home’s living spaces. Remove ground litter and clutter that serve as spider harborage.