Color: light-med. brown with dark stripe down center; legs are solid light brown with no bands

Region: Found throughout the Northwestern U.S. 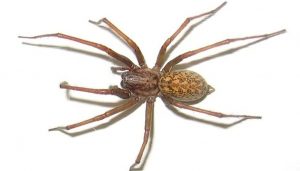 The common name for the hobo spider comes from its presumed method of expanding its distribution by hitching rides with humans along major highways in the Pacific Northwest.

Hobo spiders may be found in almost any habitat containing holes, cracks or crevices which can support tunnel formation. Since they are poor climbers, they are rarely found above ground level. They frequent dark, moist areas and are most often found in basements, window wells and crawl spaces. Hobo spiders build funnel webs that open at both ends with one end expanding outward into a broad, slightly curved sheet. An escape tunnel is commonly built in the back of the web which leads to a deep crack or other protected area.

Hobo spiders construct a funnel-shaped structure of silk sheeting and lie in wait at the small end of the funnel for prey insects to blunder onto their webs.

From late June to October, males extensively wander about seeking a mate. Several roving males may in fact enter the ground level of a structure each day during the peak activity period in August and September. Male hobo spiders are responsible for more bites than female hobo spiders because this wandering habit brings them into contact with humans.

The medical significance of its bite is still poorly understood and debated. The hobo spider will bite in defense; however there is debate around the effects of hobo spider bites as these spiders are frequently confused with other species; like the brown recluse spider. Hobo spider bites are not known to be fatal to healthy humans. The necrosis in purported cases is similar to, but milder than, that caused by the brown recluse spider, and in severe cases can take months to heal. Other reported symptoms include intense headaches, vision abnormalities, and/or general feelings of malaise.

To avoid hobo spiders, seal cracks on the outside of the home, and screen all doors and windows. Reduce clutter in basements and garages to eliminate hiding spots and keep these areas dry. Avoid storing clothing or shoes on the floor and use caution when moving items that have been stored for a long period of time. To get rid of hobo spiders, contact a pest professional.