Shape: Segmented; oval. Notch on back, hairs around the end of the abdomen. 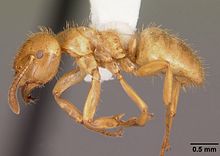 Moisture ants nest readily outdoors and indoors where moisture is concentrated. Colonies contain a single reproductive queen ant. Commonly in rotted or fallen trees and other lumber, but also in rotted or moist wood of homes. The Moisture ant has even been known to build nests around leaky pipes. When looking for a Moisture ant nest, look anywhere that is susceptible to excess moisture: near gutters, leaky plumbing, windowsills, and drains. Outside look near places that come in contact with moist soil: porch steps, support beams, and low siding. Other signs of a Moisture ant nests include trails, tunnels, and sawdust. This ant will often carry debris and soil to its nesting site to construct a carton nest: a nest that resembles a dirt clod that is often fastened around a water pipe, onto a wooden sill plate, or in a rotting wall stud.

The Moisture ant’s diet consists mainly of the honeydew of aphids, and will even care for young aphids in order to harvest their honeydew. Other insects like mealybugs, white flies, and plant-hoppers are favorite sources of honeydew for the Moisture ant. The Moisture ant will also feed on anything sweet, including food items in your kitchen.

Winged Queen Moisture ants mate in late September and October (the swarming season) then seal themselves in a small nest in rotted wood or soil to lay their eggs. The worker ants then care for and feed the ant larvae until they pupate. The adult ants will then emerge as workers and begin the cycle again. The queen is the largest member of the colony. She has wings, but loses them soon after mating. The worker is the smallest member of the colony and is never winged. Workers are of one size (monomorphic).

The major concern associated with Moisture ants is the fact that they reside in moist wood. Whether the wood was moist before the ant colony nested there or not. Moisture ants build large and obtrusive nests, and often venture indoors for a midnight snack, so they are definitely considered a pest to homeowners. They can contaminate food. Although the Moisture ant is not a serious structural pest, and will only venture indoors in search of sweets or where significant sources of water can be found for nesting, it can speed up the deterioration process as it tunnels into woods, expanding its colony.

Moisture ants are attracted to moisture. To prevent, eliminate standing water around the property. Keep tree branches and other plants cut back from the house. Sometimes ants use these branches to get into your home. Make sure that there are no cracks or little openings around the bottom of your house. Removing and replacing wet or rotting wood will usually do the trick, but for a widespread problem call a professional.