Region: Found in the Northern U.S. 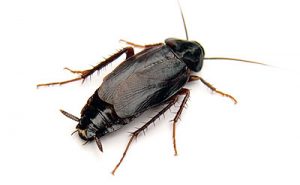 Outside, Oriental cockroaches are often found in sewers and under debris, leaves, stones and firewood. They will enter structures through door thresholds, under sliding glass doors, along utility pipes and through floor drains. Once indoors, they find harborage in basements and crawl spaces. This species of cockroach can survive outdoors in freezing temperatures for long periods of time. Oriental Cockroaches can live for a whole month without food if water is available; without water, the roach will die within 2 weeks.

The Oriental cockroach feeds on all kinds of food, especially decaying organic matter and starchy foods.

Oriental cockroaches are believed to be of North African origin, despite their name. Oriental roaches are sometimes called “waterbugs” because they come out of drains, and “black beetle cockroaches” because of their smooth, dark bodies. They are known for their strong, unpleasant, “roachy” odor. Adult female Oriental Cockroaches produce about 8 egg capsules, containing 16 eggs each which will hatch within 60 days, egg capsule are attached to protected surfaces near a food supply. They have a seasonal developmental cycle, with the highest number of adults usually appearing in late spring and early summer, with nymphs predominating in late summer and early fall. Nymphs that have not reached maturity by late fall or early winter, will usually not reach adulthood until the following spring.

Cockroaches like Oriental roaches have been reported to spread at least 33 kinds of bacteria, six kinds of parasitic worms and at least seven other kinds of human pathogens. Oriental cockroaches’ habit of feeding on filth means that they are likely to pick up germs on the spines of their legs and bodies as they crawl through decaying matter or sewage and then carry these into food or onto food surfaces.

Good sanitation is the most important factor for controlling cockroaches. Oriental roaches thrive in excessively moist conditions. Remove any fallen leaves or compost around the perimeter of the structure. Sealing around pipes and wires will help to keep them from entering a structure or using basement pipes to travel to other locations within it.