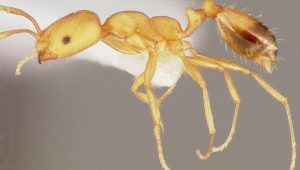 Colonies of Pharaoh ants tend to be large, with workers numbering in the thousands. If disturbed, members of the colony will migrate to new locations to establish several new colonies through a process called budding. Pharaoh ants are commonly found in commercial food handling establishments such as hotels, grocery stores and hospitals. Inside, they nest in warm, humid areas near food and water sources. Nests are usually located in inaccessible areas such as wall voids, behind baseboards, in furniture and under floors. These ants often use electrical and telephone wires as a highway system to travel through walls and between floorboards. Outside, Pharaoh ants are typically found in shaded areas or under debris. They cannot survive outdoors year-round in the northern regions of the country.

Pharaoh ants feed on a variety of food sources including sweets, oils and proteins. They will also eat other dead insects.

The Pharaoh ant colony consists of queens, males, workers, and immature stages (eggs, larvae, pre-pupae, and pupae).The size of the colony tends to be large but can vary from a few dozen to several thousand or even several hundred thousand individuals. Approximately 38 days are required for development of workers from egg to adult. Mating takes place in the nest, and no swarms are known to occur. Males and queens usually take 42 days to develop from egg to adult. The males are the same size as the workers (2 mm), are black in color and have straight, not elbowed, antennae. Males are not often found in the colony. The queens are about 4 mm long and are slightly darker than the workers. Queens can produce 400 or more eggs in batches of 10 to 12, they can live four to 12 months, while males die within three to five weeks after mating.

Pharaoh ants have been implicated in the spread of more than a dozen disease pathogens including salmonella and Streptococcus pyogenes. They are notorious for being a major nuisance in hospitals where they can enter wounds, enter IV bottles and can sometimes even seek moisture from the mouths of sleeping patients.

Seal all possible points of entry around the house including small openings and cracks around doors and windows. Keep counters and floors clean and free of crumbs. Store food in airtight containers and dispose of garbage regularly in sealed receptacles. Eliminate sources of standing water outside and use a dehumidifier indoors to prevent moisture buildup. Keep tree branches and shrubbery well trimmed and away from the house. Store fire wood at least 20 feet away from the house. Consider working with a pest professional to employ a preventative pest management plan.