Region: Found in eastern half of U.S. and the PNW 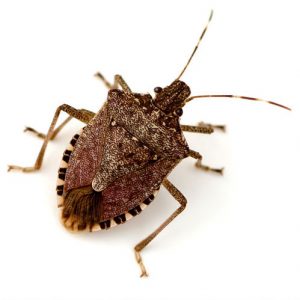 Adult stink bugs occasionally enter homes and other structures when searching for overwintering sites in the late fall. They reemerge in early spring and become active. During these warm months, they often congregate in masses on the sides of buildings.

Adult stink bugs feed on fruits. The nymphs feed on leaves, stems and fruit. They are a  serious agricultural pest that has been readily causing damage to crops. They feed on a wide array of plants including apples, apricots, Asian pears, cherries, corn, grapes, lima beans, peaches, peppers, tomatoes, and soybeans.

The smell from the stink bug has been characterized as a “pungent odor that smells like coriander.” The stink bug’s ability to emit an odor through holes in its abdomen is a defense mechanism meant to prevent it from being eaten by birds and lizards. However, simply handling the bug, injuring it, or attempting to move it can trigger it to release the odor. Stink bug populations rise because the climate in the United States is ideal for their reproduction. In optimal conditions an adult stink bug will develop within 35 to 45 days after hatching. Female stink bugs are capable of laying four hundred eggs in their lifetime.

Stink bugs have the potential to spread throughout the country, which could be harmful to the agricultural industry, as they destroy crops. Although stink bugs are not known to bite humans, their tendency to invade homes in high numbers can be a nuisance.

To prevent stink bugs from entering homes and buildings, seal cracks around windows, doors, siding, utility pipes, behind chimneys, and underneath the wood fascia and other openings. Use a good quality silicone or silicone-latex caulk. Damaged screens on doors and windows should be repaired or replaced.