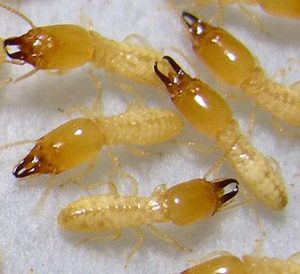 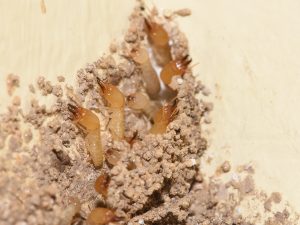 Subterranean Termites can be found in All 50 States. Termites cause more than $5 billion in home damage every year. In the Pacific NW they are second behind Carpenter Ants as the wood destroying pest. 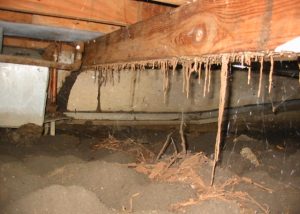 Wood, your home if you let them.

They live in underground colonies or in moist secluded areas above ground that can contain up to 2 million members. They build distinctive “mud tubes” to gain access to food sources and to protect themselves from open air. Termite colonies are organized into castes depending on tasks; workers, soldiers and reproductives. The characteristics of a subterranean termite are dependent on the termite’s role in the colony. Cream-colored Worker subterranean termites are 1/8 to 3/8’s of an inch in length. Soldier subterranean termites are of a similar body length, but are distinguished by their powerful mandibles. Solider termites have cream-colored bodies and brown heads.  Reproductive kings and queens are 1/2″ long, winged and black or brown in color. A “swarm” is a group of adult male and female reproductives that leave their nest to establish a new colony. Swarming occurs when a colony reaches a certain size. Swarming is most common in the spring (March, April, May, and June) and occasionally autumn (September and October).

Subterranean termites are by far the most destructive termite species. The hard, saw-toothed jaws of termites work like shears and are able to bite off small fragments of wood, one piece at a time. Over time, they can collapse a building entirely, meaning possible financial ruin for a homeowner.

The first clue that you might have a subterranean termite infestation is their tunnels (mud tubes). Here are some other signs that you should look; wood that appears crushed, wood that sounds hollow when tapped on, or wood that looks blistered. You could also find discarded sets of wings on window sills, tubs, and sinks, seeing termites swarming around the outside of your home, and finding small piles of ‘frass’ (termite droppings).

Avoid water accumulation near your home’s foundation. Divert water away with properly functioning downspouts, gutters and splash blocks. Reduce humidity in crawl spaces with proper ventilation. Never bury wood scraps or waste lumber in the yard. Most importantly, eliminate wood contact with the soil. Maintain a one-inch gap between the soil and wood portions of the building.

Here is an example of 3 different types of mud tubes.