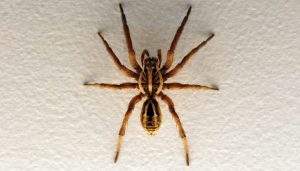 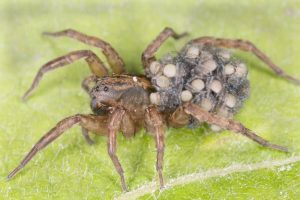 Think twice before squishing a wolf spider with a broom. If it happens to be a egg-carrying female, she might release hundreds of spiderlings onto your floor.

Wolf spiders may enter structures in search of prey. Although they are not inclined to be permanent residents in structures, they often stay once inside. Indoors, wolf spiders tend to remain at or near floor level, especially along walls and under furniture. Outside, wolf spiders can be found under stones, landscape timbers, firewood, leaves and other debris. They actively hunt during the night and usually rest in sheltered places during the day. They are fast on their feet and pursue prey.

Variety of insects including crop pests. They are robust and agile hunters with excellent eyesight. They live mostly in solitude and hunt alone, and do not spin webs. Some are opportunistic hunters pouncing upon prey as they find it or even chasing it over short distances. Some will wait for passing prey in or near the mouth of a burrow.

What separates them from other spider species is the way in which the female spider carries her eggs: in a sac attached to her spinnerets. The spiderlings climb onto the mother’s abdomen upon hatching and live there until they are large enough to hunt on their own. The mother may be carrying hundreds of offspring at a time.  Adult females are ⅞ to 1 ⅜ inches long and males are ¾ inches long. They are brown with gray hairs on its front section and the abdomen has a stripe. This spider typically creates a burrow in the ground and can be found throughout the U.S. Male wolf spiders often live no more than one year; however, some females are able to live several years.

Wolf spiders can bite, they will inject venom if continually provoked. Symptoms of their venomous bite include swelling, mild pain, and itching.

To get rid of wolf spiders, seal cracks on the outside of the home and use screens on doors and windows. Also remove ground clutter that they will find harborage.