Color: Pale yellow-tan; with a dark mark/line that runs up the middle of abdomen. 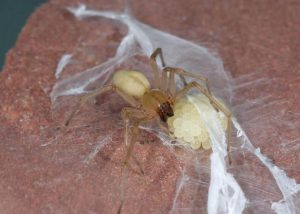 They spin a silk-like tube or sac. They use the sacs to sleep in during the day. They tend to spin these sacs around dawn.

Outside, the yellow sac spider will be under sticks, logs, in rolled up leaves, fields, meadows, bushy trees and large shrubs. Inside, they tend to create their sacs where interior walls meet the ceiling, behind pictures, or around windows. These are out-of-the-way places where they won’t be disturbed in the daytime.

Yellow sac spiders are nocturnal. As a result, you can spot them hunting their prey at night time. They feed on flies and other small insects; including spiders larger than themselves and even their own eggs.

The tips of the yellow sac spider’s legs are black in color. The color comes from tiny black hair that cover their feet. This hair enables the spider to climb vertically – up trees and walls — with ease. Since the spider doesn’t spin webs, this is a huge help in enabling the spider to climb. Most yellow sac spiders are pale yellow or tan. However, some of them range from a light green, to orange, to a light brown. This is largely dictated by the spider’s habitat and diet. Around 30 percent of adult males are killed and consumed by females at mating. A female produces around five egg sacs each, with around 37 eggs in each sac, these sacs are laid in corners of all sorts. The egg sacs are white and spun with silk. The female may guard its egg sac, so one has to be careful removing egg sacs from a yellow sac spider.  The yellow sac spider can commonly be spotted outside from April to October – warmer months when eggs hatch and young spiders mature.  As the weather turns they tend to migrate into cars, buildings, dead trees, and other structures. There, they create sacs to in which they stay during the winter. They’ll emerge fully mature in the spring.

Yes yellow sac spiders are venomous. Bites from yellow sac spiders are also often misidentified as brown recluse spider bites. The symptoms and the development of the wound are quite the same but much less severe. The bite is quite painful from the outset. A person usually develops redness, swelling, and itching near the site of the bite. Redness disappears after about 72 hours, and the skin heals in a week or two.

To protect your house from yellow sac spiders, you can install tight fitting screens on windows and doors. You can also seal any crack or crevice a spider can fit into or get access to your house through. Installing yellow light on your front and back porch might also attract fewer insects, which are food for most, if not all, spiders. Also remove clutter and debris that a spider might find harborage.