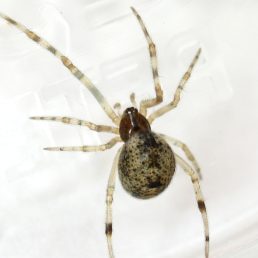 The house spider randomly selects its web locations and creates a tangled web. If a web does not yield prey it is abandoned, another site is selected, and a new web is built. These spiders have a difficult time surviving in modern homes due to low humidity and fewer insects for food. They are more likely to prosper inside structures like garages, sheds, barns and warehouses. Outside, these domestic spiders are often around windows and under eaves, especially near light sources that attract prey.

American house spiders usually feed on small insects and household pests such as flies, mosquitoes, ants and wasps. Once its food dries out, the spider usually drops it to the floor in order to free space in its web, instead of destroying and rebuilding it or changing its location.

This species can live for more than a year after reaching maturity. Each egg sac contains from 100 to more than 400 eggs, with a single female producing up to 17 egg sacs. The hatchlings remain in the mother’s web for several days. A male and female often share the same web for long periods, and several females often build their webs in close proximity. However, females will sometimes fight when they encounter each other.

Common house spiders are nuisance pests, but they pose no threats to humans.

To prevent common house spiders from entering the home, seal cracks and use screens on windows and doors. Use a vacuum to remove adults, egg sacs and webs. If a broom is used, adult house spiders can usually escape. Abandoned cobwebs should be cleaned up often.