Color: Many colors; red, orange, to yellow. Some with or without markings.

Region: Found in throughout North America 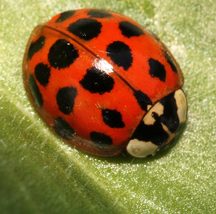 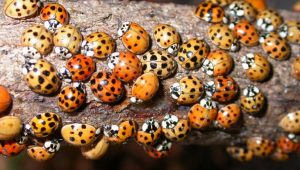 About 50 species of non-native lady beetles have been introduced into North America. Nonnative
lady beetles compete with native species, sometimes even eating their eggs and young,
and they also feed on native insects, such as butterflies, that are not pests. One species of lady
beetle, not known from Oregon, is a major crop pest.

Lady beetles live outdoors, but they are known to look for warmer, sheltered areas to overwinter; such as your home.

Many are beneficial and help keep plant feeding arthropods, including aphids, scales, mealybugs, and even mites, under control. Some species feed on fungi and molds. Some of the non-native lady beetles feeds on other lady beetles and their eggs.

Multicolored Asian Lady Beetle (Harmonia axyridis); This invasive lady beetle is a well known aphid predator in its native Asia. It was released several times as a biological control agent starting in 1916 before becoming established in 1988. It is now wide-spread throughout the continental US and is out-competing many native lady beetle species. It is best known for its tendency to enter homes in the fall in large numbers, where they are a nuisance.

Seven-spotted or C-7 Lady Beetle (Coccinella septempunctata); This invasive lady beetle was introduced from Europe for the biological control of aphids. It became established in the early 1970s and has spread to many US states, where it may out-compete or prey upon native lady beetles.

Mexican Bean Beetle (Epilachna varivestis); Native to North America, but not native to Oregon. A major crop pest of beans and other legumes.

Non-native lady beetles are a serious threat to native insect species including native lady beetles. Even species native to North America but collected outside of Oregon should not be released because they may carry diseases and parasites not found in Oregon. The are mostly a nuisance pest; as they aggregate in the walls and other parts of dwellings. They may enter houses in large numbers, 15,000 to 20,000 is not uncommon. In addition to beetles biting (which they do) the Asian lady beetle also produces a yellow viscous, foul-smelling defensive compound when it is disturbed that may soil whatever it contacts. Therefore, when people disturb them or try to remove them by sweeping, with vacuum cleaners or with other tools, the foul odor spoils the air and yellow spots on people, expensive furniture and drapes result.

All buildings should have any cracks, crevices or holes in the exterior walls and especially around windows and doors sealed or caulked to prevent entry. Make sure screens are in proper working order. The lady beetles often enter attics and can accumulate in large numbers in these spaces for overwintering. 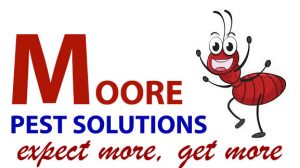