Color: Orange to red or brownish-black

Shape: Two-segmented; midsection has one pair of spines on top; long hairs on their head. 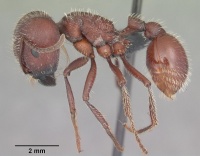 Harverster ant mounds are moderate to large in size. A colony inhabits a nest that is up to 16′ deep, with a irregularly conical nest mound that can be more than 35″ in diameter. Typically, large areas surrounding the mound are stripped of vegetation to prevent shading, as harvester ants usually remain within the nest during the hottest part of the day. Swarming typically occurs during the summer season, specifically in the afternoon following a rainfall. The queen stays at the bottom of the nest, and workers usually relocate themselves and brood within the nest, capturing safe levels of heat.

Workers harvest seeds and pollen directly from plants and gather fallen seeds. Some seeds are sometimes stored in chambers within the nest and are depleted during winter. Workers also gather newly dead insects.

Mature colonies consist of up to 20,000 workers and one queen. A queen can live up to 40 years, and many colonies survive for 20 years. Colonies contain 1000–3000 brood items and can produce 1000 reproductives, or alates, in a year. Workers’ bodies are usually dark red and those in a mature colony are on average 6 mm long. Workers vary in size, but are not subdivided into groups of different-sized individuals with special roles. A worker lives for an average of six months.

In addition to posing property threats in urban settings, harvester ants are also known to sting when their nest is disturbed. Harvester ant stings can cause painful sores and possible allergic reactions in people. Some species have a stinger with reverse barbs, so it actually breaks off in the wound, like that of a honeybee.

Homeowners should consider working with a licensed pest professional to employ a preventative pest management plan. If a harvester ant infestation is suspected, look for the nest, which is often found in bare soil areas.